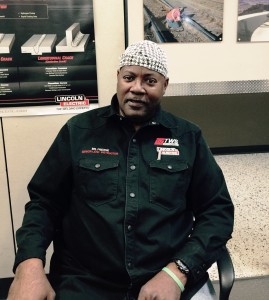 Thanks for sharing your story, Freddie; how long have you been teaching at Tulsa Welding School?

It’ll be nine years on November 14th this year.

So, how did you get into welding so young?

It’s kind of a long story. As a kid I had a backyard full of bicycles and bicycle parts. I used to tinker with them; take parts off one and add them to another. One summer I wanted a Chopper. All the kids had them, but my parents couldn’t afford to buy me one. So, I decided to make one.

Unbeknownst to my father, I’d unscrew the hinges on his big tool box that he kept locked, flip it over, and get my tools of choice – a hacksaw, adjustable wrench, pair of pliers, and a hammer if things didn’t go right. I cut the forks on one bicycle and hammered them on to another one. One day I was riding down the street. I jacked the front end up, and it came off. I thought, okay this isn’t going to work too well…

This is where the welding comes in. We used to go to the high school and play basketball. One day not long after my bike fell apart, we were up there playing and it got dark. FCCJ [now Florida State College] had a night class there. Being curious young kids we saw sparks and flames so we went and asked the guy what he was doing. He told us it was a welding class. As he told us more about it I had an idea. I told him about my bike and asked him if he could fix it for me. He said sure; a couple of days later I took it in and he TIG welded the forks for me…and there you go. I was 14 and I was hooked! That passion for bicycles went on to mini-bikes, go-karts, motorcycles, and my biggest passion now is drag racing.

When you were a young kid, what did you want to be when you grew up?

I was kind of indecisive. I wanted to be either an architect, a welder or a mechanic. After that summer, welding kind of overshadowed all of it and took over.

When you started work in the field, what kind of stuff were you welding?

I mostly did TIG welding. My first job was TIG welding boat props, rudders, shafts, stuff like that for a propeller company. After a couple of years with them, I thought I should be making more money as I was more experienced, so I moved to a company called BFE Inc. They did a lot of work for Amtrak and Delta, stuff like galley carts and tables. I worked there for a while before I got laid off. Then, after talking with my brother, I decided to move to Atlanta where I worked for Westinghouse Electric. I worked for them for eight or nine years. Then moved to a sheet metal company. My career kind of took off.

I was back in Jacksonville working at Stellar Group with a guy called Jeff Hunter. He was also on the Board of Directors at Tulsa Welding School. He said I should think about teaching because of my demeanor and welding experience. He thought I’d make a great teacher and be a good fit for the school.

I thought about it, and thought about it some more. I wasn’t getting any younger, so I thought maybe it would be good for me to pass my knowledge on to the kids. I went for an interview and a weld test, and they offered me a part-time position in the evening. For a while I worked at Stellar in the morning and at Tulsa at night. Then things got rough at Stellar, and they laid off a bunch of people. But the timing was perfect. The school said they really needed me full-time, so that’s what I did in 2008.

When I first started I wondered if I really wanted to do this. When you’re teaching you run into a lot of different personalities. Some of the guys you click with, some you don’t. But the more I did it, the better I got. Teaching became a real passion for me. I figured this is what God wanted me to do, to pass all my knowledge on…and it comes easy for me now.

When I get a student with no welding knowledge at all, I can pass on my insight and knowledge to help them turn their life around. That’s a very satisfying feeling. When I was welding, I’d see a building or ship I’d welded on, and I could take pride that I’d helped build it. That’s fine, but now I take pride in helping young people change their lives by giving them the skills to make some real money. It’s very gratifying.

A lot of students call me a hard-ass, and I can accept that. They can call me names, but I’m not here running a popularity contest. My ultimate goal is to give them the knowledge to help them become more gainfully employed. A lot of times when students come back in to see us, having found good jobs, they thank me for being hard on them because I pushed them to be the best they could be.

What do you teach?

I’m teaching Phase 10; it’s at the end of the program when students can see what they’ve learned. It’s kind of a combination of Phases 3, 5, 6 and 7. We take a project from each of those phases, and the student has to perform it. Then we’ll bend it, they’ll cut it out, and we’ll bend a coupon for them to see if they’re ready to go out in the industry.

I might come off as a hard-ass, but I ‘m easy going. My wife will tell you I’m a teddy bear! I like people. I can get along with anybody – that’s who I am. I don’t meet strangers, and I try to live life to the fullest.

My grandfather, Ned Owens. He had a great impact on my life. He instilled a lot of values and standards in me. My biological father died when I was six years old, so I really didn’t get that father figure until my mother met my step-father when I was maybe eleven.

My wife, Samantha, is a kindergarten teacher; we’ve been married eleven years. We have seven kids between us; we’re like the Brady Bunch. The oldest is 34. The youngest is 19, and we have 14 grandkids!

If you weren’t a teacher, and you could pick your job, what would you be?

I’d probably be an architect, maybe a draftsman, or an engineer. I like to design stuff.

I went to a vocational high school, so my education was free. I tell these guys that they’re paying good money for an education, but it’s a minute amount compared to what they can make in this career. It’s a small investment in themselves. If they come here and squander that investment because they don’t work hard, don’t gain knowledge, and then leave and can’t get a job, I ask them who’s going to be at fault? Them or the school? It’s not the school because the instructors here are good, and I include myself in that. If the students don’t gain the knowledge, they’ve only got themselves to blame.

If you come to the school, have your mind made up that this is what you truly want to do. Once you’ve decided that, put forward your best effort because welding can make you or break you. It can get you frustrated, pulling your hair out, but at the end of the day, metal has no pulse, no heartbeat. It really doesn’t give a damn about you. So, you make it do what you want it to do. If you get frustrated and have your little temper tantrum, at the end of the day that metal is still in your booth waiting on you.

I like to TIG weld. It’s versatile. You can do stainless steel, aluminum, any kind of exotic metals…plus it’s not very smoky. It’s a clean type of welding versus pipe where you get dirty and grimy working in ships or power plants. With TIG you can work for NASA or Boeing, any airline, or sheet metal facility.

Thinking of your time in the field. What was your favorite part of the job?

The traveling. I was a road dog, a paper chaser. I liked chasing money and the power plants. I’ve been as far as Jamaica, Panama, covered a lot of Alabama, a lot of Texas, Georgia and down south of the border.

You get an unexpected afternoon/evening to yourself; what would you do with that time?

I’d call my wife and tell her, “Hey baby, I’m off for the day, what do you want to do? Movies, dinner?” I’m pretty much a romantic. When my wife goes to work, I’m asleep. When I come home she’s sleeping, so we really don’t have much time till the weekend. Any extra time that I can spend with her, I’d take it. She’s the love of my life, my better half… look you’ve got me being all sentimental! 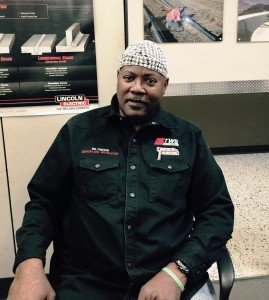 If you were to tell someone, “Thank You” for making you who you are today, who would it be & why?

It would be my high school welding teacher, Mr. Kenneth Vincent. He taught me the basics of welding. He was hard, but kind, and very good at his trade. I was his best student, if I can say that, because it was something I really wanted to do. I wanted to learn as much as I could, and he gave me that opportunity. He got me involved in VICA, the Vocational Industrial Clubs of America, which is now SkillsUSA and the American Welding Society. He entered me into a bunch of contests, and he took a shine to me, mainly because I was interested, while most of my peers gave the man a hard time.