Chris, 33, from Baroda, Michigan, is a Senior Welding Instructor at Tulsa Welding School, Jacksonville campus. Chris, a TWS Jacksonville graduate, has been with TWS for five and a half years.

Thanks for your time, Chris. When did you start welding?

I attended Tulsa Welding School in 2007 and started my career in 2008. My experience in welding started a few years before when I was about 16. My father and I built a custom low rider truck. That project is what truly started my passion for welding. We rebuilt the truck from the ground up, because I’d totaled it in an accident. In order for me to get another truck or vehicle, my father’s plan was to have me rebuild the one I wrecked. So, being an engineer, he designed the frame and we rebuilt into a custom show truck.

That sounds an awesome project to get started with. Talk us through your welding career.

I bounced around a little, so be prepared! My first welding job, I built specialized, custom semi-trailers. You don’t see them on the road often because they usually have to shut down the interstates to move them or they go to places like salt mines. That was my very first job fresh out of Tulsa Welding School in 2008.

After that I made my way into power plants as a welder, working on all the cooling pipes to the reactor pools. That was the start of my traveling career. I joined DZ Atlantic Group. I traveled around most of the Midwest for a couple years doing power plant work. After that I went up to South Dakota and did steam turbine generator maintenance for about two years. Then I did chill water systems for Google data centers, which was a fun job, traveling up and down the east coast doing install servicing at their data centers. Then right before I came to Tulsa to teach, I was actually doing work at paper mills. 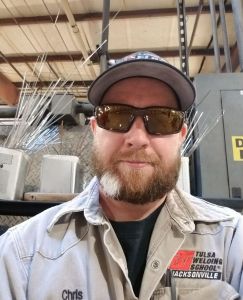 When I came to TWS in 2007 as a student, I discovered I had the drive for teaching by interacting with my instructors. Some of them are still here and are my coworkers today. I saw the way they interacted with me. I discovered that some of their backgrounds, some troubled, were like mine. Seeing how they’d excelled in their careers and overcome their backgrounds made me want to give back the same way. I wanted to encounter students with a similar troubled background to me and find ways to help them. To show them the path through welding that worked for me and helped me overcome my struggles.

If it’s not too personal, what were your struggles?

I could not stay out of trouble. I was never good in school, constantly in trouble with my parents, getting into things I never should have instead of focusing on studies and all that. Coming to TWS in 2007 was when I started to turn my own life around. I’d previously attended college, Western Michigan University, for three quarters of a year out of high school. I didn’t do so well in school; I lost my swimming scholarship there. I got kicked out. I ruined a perfectly good chance to go to college with a free ride.

My goal, up until I graduated high school, was to be a professional motor cross racer. I grew up living the sport, training day in day out. When I wasn’t in trouble for something, my parents would let me ride! I turned pro at 17, but like I said, certain other things held me back.

I just like helping the students, giving them a helping hand that maybe no one else might give them. For a lot of kids who come to the school, it’s often a second chance for them. I’d like to be that person to help guide them down the path to being a very successful person.

Why was the time right in 2016 do get into teaching?

Family. I took this job when my son was about a year old; I’d missed most of his first year traveling.

Tell us a little more about your family.

Ashley and I have been married about seven years, and our son is now six years old.

I recently left the motocross world due to a shoulder injury that happened a couple years ago that required surgery. But most people won’t know that I have recently become a 33-year-old BMX racer! I’m following my son’s path. At six years of age, he is a factory sponsored rider! He got me into it because he doesn’t have the interest in motocross that I do. But it’s still two-wheel racing and I have followed him into it.

I would like to meet with a motocross idle, Jeremy McGrath. He was the king of Supercross in the 90s. One of the most winning riders in history. I’d love to sit down and just talk dirt bike racing with him.

I did enjoy the traveling, actually. I got to see different places, meet different people from all kinds of backgrounds with different welding skills. I enjoyed all that. Yes, the money was nice—don’t get me wrong—but I really enjoyed seeing the country, meeting new people. The constant change up was really nice, too, instead of being in the same place for months or years on end. I’d get to see so many places that I was like a little kid in an amusement park getting to see something new all the time. It made it exciting.

How long was a typical job?

It varied. During the paper mill work, I’d be at a job site for one to two weeks and then move on to the next. I’d be at some of the power plant jobs a little longer, about three or four months. It depended on the company I worked for, and what job we were doing. That would determine our length of stay.

I think I know the answer to this…What would you do with an unexpected afternoon off?

If I can get my son out of school, we are going to the BMX track to ride. Or if we can’t go to the track, we’d go to my father’s house to go fishing on his private pond. Either way my son would be with me!

I don’t want to preach attendance but being in your booth welding for as much time as you possibly can is the greatest thing you can do to learn. Welding is hands on. You can only learn so much from books or YouTube. Being in the booth, hands on, every day is the only way you’re going to perfect your skill the best you can in the seven months at school. Of course, you’re going to keep learning for years to come on the job. But come into school with an open mind. When things don’t go great the first day or in the first phase, don’t stress. You’re going to have hiccups along the way, but the more time you put in working with your instructors, we can help you get you over the hurdles to make you the best welder we possibly can.

One gentleman, my biggest mentor in this field—Robert Denard, he went by Red—gave me some welders and one of his TIG torches. I’ve held on to them both for years. He was my direct instructor at one time when I was a student here, and then he and I ended up working together at a job. He was my boss, I was his righthand man. Whenever I use them, they just remind me of all the knowledge he gave me. Not just as my instructor, but also when we worked on the job together. On the welding side, he’s the one who taught me everything I know today.

My father, Raymond. Like I said previously about wrecking the truck that he’d bought me for my upcoming 16th birthday, he taught me how to rebuild it. In doing so he introduced me to fabrication, engineering, welding, everything basically. He made me take pride in my work. He also gave me a big kick in the butt the last time I really got in trouble, when I got kicked out of college for not paying attention to my studies. When I came home, he told me I had to find something to do with my life, otherwise I’d be out on the street. He wasn’t really threatening me, but it was the scare which led me to finding Tulsa Welding School and set me on this path!